A silver coin of Persian king Khusru II (590 A.D to 627 A.D) was found at Chimbel, Ribandar, Goa. Confirming ancient trade links between Goa and Persia, in the pre-Islamic age

The Persian cross at Agassaim

Christianity arrived in Goa hundreds of years before the arrival of the Portuguese. This is confirmed by the St. Thomas cross discovered at Agassaim, Goa. The cross has letters in the acient persian language (pahlavi), a language not used after 700.A.D.

The Jewish merchant Allen B Hassun made commercial voyages from Aden to Sindabur (Gopakapatana). His remarks are recorded in the years 1116-1117 A.D, as a part of the Cairo Genizza. A discovery of documents found in Egypt, containing 106 letters of Jewish seatraders in the Indian Ocean.

“Having sought God’s guidance, I decided to travel to Sindabur with the corals and Storax, for I did not find a market for it [meaning the corals]; all they offered me for it [in Aden] was 18 [dinars] per selling unit.(Storax, ‘may’a’, an aromatic resin obtained from trees in Asia Minor, used in perfume and medicine, a common commodity exported via Alexandria, Cairo, and Aden to India”.

Jacob was a shipowning Jewish merchant who was involved in the seatrade between the Konkan, Malabar and Egypt.

The Spanish Catholic missionary departed in October 1542 for Sri Lanka and Malaka. In a letter written in 1545 to King John III of Portugal, Xavier requested an Inquisition to be installed in Goa. Xavier returned to Goa January 1548, and stayed upto 15th of April 1549. The Spaniard died on an island in China in 1552.

Prior to the Inquisition, in 1543, Dr. Jeronimo Dias, a Marrano Jew, was strangled and burnt in Goa. He was executed because his views conflicted with those of the Roman Catholic missionaries.

Jewish past annihilated over time (read The Times) 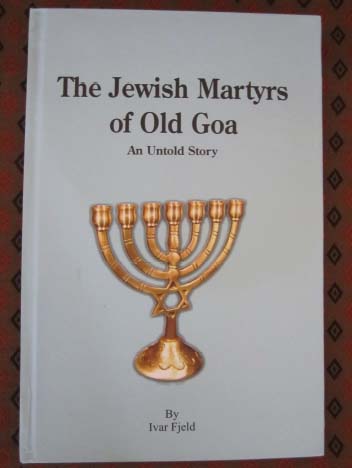